skip to main | skip to sidebar

Bloop, bloop, bloop - another one bites the dust. 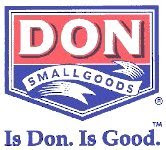 Don Smallgoods was founded in 1940-something by the very successful butcher / abattoir owner, RJ Gilberston (some of our older readers may remember his chain of butcher outlets). Named after his beloved football team and suburb (Essendon), he changed the menus of ‘ordinary working families’ (c) K. Rudd.

Who hasn’t been to a party where Don kabana, stras, salami or frankfurts were served? Amongst Australian readers, I assume none. Before old RJ founded the smallgoods manufacturer, processed cured meat was, just like soccer, garlic and spaghetti, for ‘wogs’, but he put thinly sliced strasbourg on the everyman's plate (next to the Coon cheese squares and those sickeningly sweet green cocktail onions).
Cut forward 60 years later to today, where the current owners of the brand, George Weston Foods Limited, have announced that 620 people (many of which do not speak English) have lost their jobs. Of course, marketing and HR departments get to keep their jobs, but the manufacture of the smallgoods looks like it’ll head off-shore.

They have promised to offer the sacked workers, “transition program employment assistance” – I speak English fluently and I don’t have any idea what that means, so god help their migrant workforce.

“They were incredibly sad and disappointed that this is the decision that's been made and we took them through the reasons for the decision," he (Don Sutton CEO) said. Mr Sutton said Don Smallgoods had suffered about $80 million in losses over the past nine years ...

If that’s the magnitude of the financial loss then yeah, that’s what has to be done, and I feel genuine pity for the workers. But the reason why I’m posting on this dry corporate matter is because I know a bit about this joint.

Here’s my version of events. RJ Gilbertson founded a top quality company and it was highly profitable. His descendants largely hate each other’s guts and the company got bundled up in the 80’s and sold off in bits because greed was good back then and none of the family could get along properly. History is full of examples of families falling apart when money gets involved. You want your grandchildren to all get along like kissing cousins? Well, if you’re a millionaire businessman leaving your company to your children, I tell you, no fucking chance.
Some of them still live handsomely on the proceeds of the sale but the company itself has gone down the drain because large multi-national companies quite often have no idea how to run a boutique family business which should not have been sold in the first place. Much of a company’s equity exists in the ether and can only be understood by people who personally care about the product and helped build the company.
The Gilberston name is still revered in Essendon - at the club, and throughout the streets, but old RJ, who by all accounts was a top bloke, is turning in his grave tonight.
I’m not a knocker of modern society. I think the world, despite pollution, gets better year by year. But one thing modern society can’t seem to handle is ‘family businesses’. Another Aussie icon bites the dust.
Is Don, Is Broke.
Posted by Perseus at 6:28 PM

I was actually driving past there today(was demonstrating a new truck to one of the neighboring buisnesses) and was wondering why there was TV cameras everywhere...


Also, correct me if im wrong, but isnt all the production part of the business being shifted to the castlemaine plant, not offshore...

But yes, a damn shame for all the workers, many of whom have been there for years...

I'm puzzled as to how Don could lose $80 million over the past nine years.

How do you lose $80 mill in a boom economy when you have almost no competition?

It wasn't as though the smallgoods market was flooded with cheap Chinese-made pork-strass*.

*Mrs Insertnamehere, who is originally from Adelaide, insists on calling it "devon". I shake my head sadly.

Actually no, she calls it "fritz".

Pft. Adelaidians. They also rhyme the word 'dance' with 'Aunts' instead of 'pants'.

Oh, and my guess as to why they lost $80 million is because in its heyday the company used to comprise of one boss and then lots of people making and delivering meat. Now there's probably 50 staff in 'management' who demand high wages.

Up until the 80's, the Gilbertson family also owned all the abatoirs, and also owned a lot of the cattle, but they were sold off separately. The company was more profitable when they owned their own base meat products.

Couldn't RJ Gilbertson just have held a competition to leave his factory to some deserving kid? You know, like leave gold coins in select smallgoods, give the winning kids a tour of the factory, then the one child that isn't chopped into kabana/shrunk into cocktail wieners/attacked by dago oompah loompahs inherits the whole shebang.

Boogey, that is a GREAT plot for a movie. 'Charlie and The Meat Stuffing Plant'. Starring Marilyn Manson. The 'dago oompah loompahs' could all be 7' Bosnian refugees.

Is there no end to their evil!

Didn't the Nicholas "Aspro" family write the book on the intergenerational pissing away of the family fortune?

I remember reading somewhere that the rough rule of thumb is

It's all my fault

As a gesture of solidarity with the Don smallgoods workers, I'm going out tonight and eat an entire cow.

Ramon, I don't think there's much cow in Don's smallgoods.

Catlick: Jamie's doing alright, but ask any of his cousins/siblings if they like him.

I know I'm going on but I do know a fair bit about this mob... there's possibly 'snout' but there's no testicles or eyeballs in the product. The company, back in the 80's, employed scientists (who happened to be family members) to clean up the process, and they ended up attracting the attention of the Government who then adopted their methods and applied it to all meat processing in the country. Australia has the cleanest, safest meat product in the world, and you can attribute our meat processing laws back to Don (as a result of these laws, minimum requirements were also set in place back in the 80's on the Dim Sim. Mmmm. Steamed dimmies.)

Is that why my dimmies lack cat??

The current rise in metrosexuality can therefore be directly attributed to the Don.

I owned a smallgoods run in the 80's and Don always had a high quality product. They sell bacon, ham etc to take away outlets so I doubt they would be adversely affected by people eating take out. I doubt that the small percentage of vegetarians would really effect them either. We havent suddenly introduced any kind of free range pork legislation so I can only put their demise down to mismanagement.